The Why/How Localizer Task is a robust, efficient, and standardized task for investigating social cognition. Although the task is optimized for administration during fMRI, it yields reliable performance outcomes and thus may be useful for behavioral studies. The standardized version available here corresponds to the version reported in Study 3 of Spunt and Adolphs (2014). It features the 2 x 2 factorial design shown below: 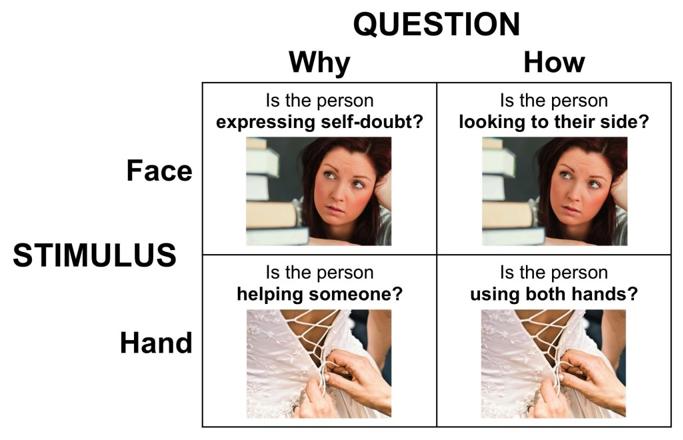 Overview of the Contrasts

In the validation paper, our focus was on the Why/How contrast, which reliably modulates activity in brain regions thought to be important for various aspects of higher-order social cognition. The thresholded Why/How contrast is depicted below: 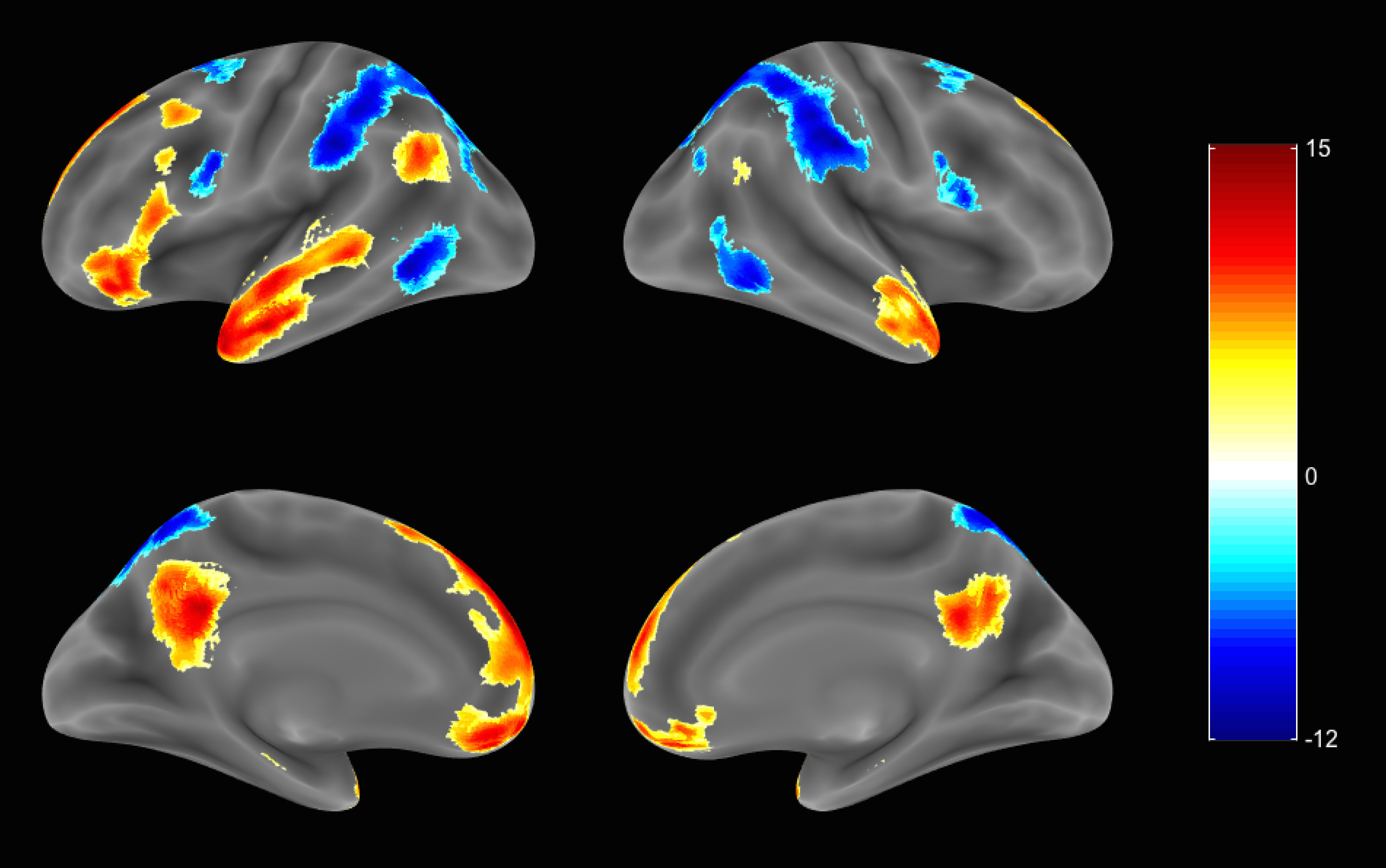 The Why > How comparison isolates brain regions commonly observed in studies in which participants are induced to impute and reason about the mental states of others, or what is often called either "mentalizing" or "theory-of-mind". Importantly, in Study 2 of the validation paper we showed that the Why > How contrast is distinct from the Belief > Photo contrast produced by the Theory-of-Mind Localizer developed by Dr. Rebecca Saxe. In other words, the two contrasts isolate distinct uses of the broad and complex human ability to reason about the minds of others. Conversely, the How > Why contrast produces activity in brain regions thought to be important for understanding and naming the specific motor actions that makeup actions and emotional expressions. A subset of these regions are part of what is (controversially) known as the human mirror neuron system, often called simply the "mirror" system. The unthresholded group-level t-statistic maps reported in the study are available at Neurovault.

The thresholded Face/Hand contrast is depicted below:

To run the task, use the run_task.m file. It accepts two arguments. The first specifies the order to use. There are 4 orders to choose from. If you do not specify this argument, if you leave it empty, or if you define as zero, then one of the four orders will be randomly selected. The second argument, when specified with the value of "1", will do a brief test run of the task (which lasts only 20 seconds). For example, this will run a randomly chosen order of the complete task:

This will run order #3 of the complete task:

This will run a test run (consisting of just the 1st task block) of a randomly chosen order:

This task uses Psychophysics Toolbox Version 3 (PTB-3) running in MATLAB (The Mathworks, Inc.). Total runtime depends on settings in the task_defaults.m file that should be in the same folder as this file. In this file, you can set the defaults.prestartdur variable to change the duration of the fixation period following the trigger and before the first task block (default = 4 secs). In addition, you can set the defaults.pace variable to select either the default fast or optional slow version of the task. The slow version gives participants more time to read the question cues and make their responses and may be ideal for studies in patient populations or children. The timing of the two versions is shown below (this assumes that the defaults.prestartdur variable is at the default value of 4 secs):

In addition to these timing parameters, several other potentially useful settings can be adjusted in the task_defaults.m file. You can check them out in the file itself.

The score_task.m function can be used to score an output data file. This function will also return onsets and durations for the conditions that can be used to construct single-subject regression models.

Feel free to shoot me (Bob) an email at: bobspunt@gmail.com